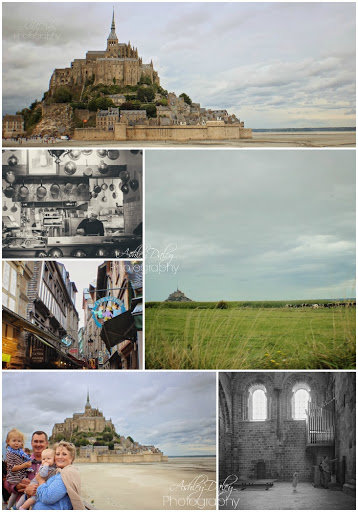 The day after going to Giverny and Rouen, we headed down to Mont Saint-Michel. As we drove closer to the island, it was amazing to see the abbey rise up on the horizon.

Once, we parked, we got on a free shuttle that took us across the bridge to the actual island.

The abbey was originally built in the 8th century when St. Aubert was visited by the angel Michael who instructed him to build a church on the island.

During the Hundred Years’ War, the English repeatedly tried to take hold of the island with no luck. Mont St. Michel’s resistance inspired many, including Joan of Arc.

Today, the island is home to about 40 residents. 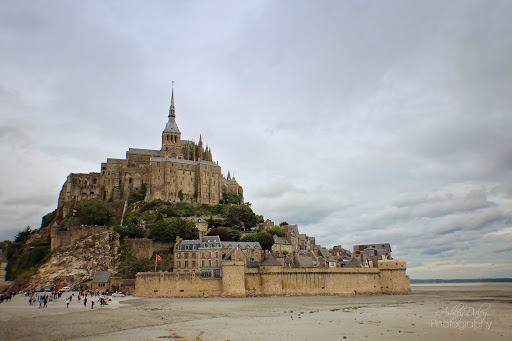 Once we got to the island, we were able to see the abbey’s beauty up close. And oh my goodness, was it beautiful! London kept saying that we were at Rapunzel’s castle. In fact, according to several articles (including http://www.buzzfeed.com/ashleyperez/10-real-life-locations-that-inspired-disney-films#.jspdK1zEQ5 ), the castle in Tangled was in fact based off of Mont St-Michel.

When we went inside the walls of the town, it started to rain (and was lunch time), so we quickly ducked into the nearby restaurant, La Mere Poulard. We actually saw this restaurant on a Rick Steves episode so we were interested in trying it out anyway. The kitchen was fun to see as we walked in and I loved all the copper pots and pans hanging up. The menu itself was a bit expensive in my opinion and the food was a bit bland (but again, just my opinion. I’m used to some pretty flavorful Southern Californian food), but it was still a nice experience and at the very least got us out of the rain.

The town itself is pretty commercial but in it’s defense, it’s been that way for hundreds of years. Back when the town was first established, pilgrims would travel from far away to see the abbey and would stop to get a quick bite to eat as they waited for the tide to go out to get back to the mainland.

It unfortunately started to rain quite a bit as we were walking through the shops, so we mostly just tried to hurry up to the abbey itself. Once we reached the abbey, we were able to get a little break from the weather.
Tickets were 9 euros per adult (children under 18 are free). We got an audio tour with headsets and were free to walk around the abbey.

The abbey was built in the old Romanesque architect. The windows are smaller, but still let in a good amount of light. The arches are rounded rather than pointed, as in the Gothic style.

Coming out of the abbey, we were able to stop in a little place (unfortunately I can’t remember the name) that was very family friendly and had excellent crepes and hot chocolate. It was the perfect treat to go along with our rainy weather.

Even with the rain, we still had a wonderful time exploring Mont St-Michel. I highly recommend visiting it during any visit to France!

our family's travels and little adventures

My favorite hobby is capturing the beauty around me.

"Not all those who wander are lost"

Inspiring Families to Travel Together